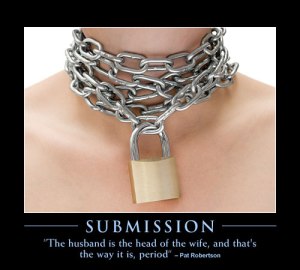 When we discuss the submission of a woman to her husband, in accordance with the instructions of the Apostle Paul, the picture I see many painting is of a lowly woman, who mustn’t speak unless she is spoken to; who must wait hand and foot on her husband; whose sole purpose in life is to seek her husband’s approval and yield to him on everything. Luckily for me, my parents were largely equal partners, with Dad’s word prevailing mostly only when it came to disciplining us, their four boys. Most other things were as a result of mutual consultation and compromise.

Where does this instruction to submit come from and what exactly does it say? Let us look at scripture:

“Wives, submit yourselves to your own husbands, as it is fit in the Lord. Husbands, love your wives, and be not bitter against them.” – Colossians 3: 18-19.

“Women should remain silent in the churches. They are not allowed to speak, but must be in submission, as the law says.” – 1 Corinthians 14: 34

One of the things that has struck me as a Christian, growing up in church and listening to sermons over the years, is how much of an effort modern day preachers (both orthodox and Pentecostal) make to provide as deep insight as is possible on scripture. It is now very common for preachers to discuss the Hebrew or Greek etymology of the original words from which the English translations were derived. It also frequently happens (although most pick and choose when this is acceptable) that the preacher discusses the cultural context in which certain instructions were given.

For example, see the following text from the 1st letter of Paul to the Corinthians, Chapter 14 –

“5 But every woman who prays or prophesies with her head uncovered dishonors her head—it is the same as having her head shaved… 13 Judge for yourselves: Is it proper for a woman to pray to God with her head uncovered? 14 Does not the very nature of things teach you that if a man has long hair, it is a disgrace to him, 15 but that if a woman has long hair, it is her glory? For long hair is given to her as a covering. 16 If anyone wants to be contentious about this, we have no other practice—nor do the churches of God.”

Most conservative churches/Christians still frown at women with uncovered hair in church and during family prayers. However, many “charismatic” preachers explain that this admonition was necessary in ancient Corinth because prostitutes used to come into the temple to solicit men. Covering one’s hair as a woman was primarily to distance one’s self from women of easy virtue.

Both extremes of the Christian spectrum however appear to still fully embrace the doctrine of submission, at least where it comes to one’s husband. Women are no longer silent in church, as this was also apparently issued within the context of a cultural construct. *Shrugs*

Being logical, what this suggests is that if culture no longer supports a Biblical instruction that was not expressly declared a sin, we ought to reconsider how much importance we attach to strict adherence.

Some may argue that submission, or deference, of a woman to her husband is part and parcel of most indigenous cultures and this is probably true. However, culture is nothing, if not fluid.

From ancient times probably till about 50 years ago, the husband was undoubtedly his family’s sole breadwinner and protector. Perhaps this is even why (going back to the Bible)  a man was required to take his deceased brother’s widow as his own wife. Most wives were homemakers, ensuring the family was fed and the children looked after. She would be utterly defenceless without a husband and the man’s word simply had  to be yea and amen.

Then came this beautiful thing called education, recalibrating our civilisation. Families, on the whole, began not needing to decide which children would go to school and which would stay at home. Girls began to have the same education as boys and what we have today are men and women, husband and wives, standing on very similar footing with regard to earning power. Today’s woman is lifting a lot more weight, on the average, than her counterpart half a century ago. Today, some women even earn more than their husbands and it is said that many men in this position assume control of the wives’ salaries, deciding how much of it she should receive as an allowance. Why should such women be subordinates? 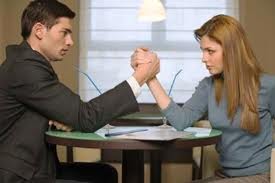 And let us even abandon cultural logic and examine the dynamics of romance and coupling. The great majority of women were chased, intently, by their husbands, with gifts and words and persistence and promises.  As a man, you go through all that and reward her by insisting she be your doormat?

The truth, as I see it, is that submission is a two-way street. In functional, happy marriages, wives submit to their husbands and the husbands submit right back. Otherwise no one would be looking furtively at the their wristwatches at bars and hangouts, for example. Today’s marriage needs to be built on a lot more mutual love and mutual respect for each other. In some matters the husband is boss. In others, the woman is the boss. Besides, with the admonition for the wife to submit comes the one for the husband to LOVE his wife. Loving and walking over one’s wife are irreconcilable, to my mind.

Let me end with an anecdote I first came across on the internet many years ago.

At his 50th wedding anniversary celebrations, a man was asked by one of his guests how his marriage had lasted so long. “Oh, that’s easy”, the man replied, “We decided very early on that she would let me decide all the big stuff and she would decide the small stuff.”

“Oh, like where we would live, what colour we would paint it, the kind of furniture we would have, where the kids would go to school, what sort of car we would drive and so on.”

“That was the small stuff?” his guest asked incredulously. “So what did you get the final word on?”

“The really serious stuff, like who our country should go to war with, who we should elect as president and how the owner of the team I support is an absolute donkey.”

9 thoughts on ““Submission” is a Myth”