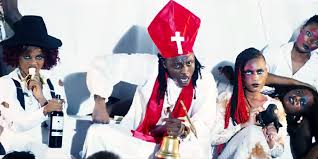 Following the day of Shiwajunfest, news reached the Chronicler that the Tword had found another soul worthy of the divine revelations of unchill. But it seemed this secret chronicler did not in fact know that he had been imbued of the Tword.

The secret chronicler received Tword of Asos, daughter of Gambrach, to whom her husband Noodlinho had now done what Dinobetes Mellitus had threatened to do to Remy Ma, wife of Shiwajun – behold, he had known her and she was with child. And thus was it chronicled by the secret chronicler –

“Only Noodlinho and his wife, Asos, know what it is about their union that drives them to perpetuate one of the most enviable and durable signs of love. They got married last year in a savor of celebritine ceremony. And to prove their commitment, abiding love for each other, and to increase the population of the Kingdom, Asos, we gathered is expecting Noodlinho’s baby. Casting a probing look at the ever reticent Asos when sighted at an event recently, it was glaring to all wandering eyes that she has been noticeably put on a 9-month maternal course by ‘Linho through a legitimate conjugal collaboration. Looking so robust and bigger than her pre-marital figure, the widely acknowledged self-disciplined lady was cynosure of all eyes as onlookers turned their attention on her and began to make some biological permutations.” [He has such a way with words, this secret chronicler.]

Thus was it said of the secret chronicler, “Blessed is he that chronicles without knowing that he chronicles, for out of his quill poureth pure bants.”

In the Crescent Lakes kingdom of King Yade-Ben, after much houdini and alapeanutbuttersandwiches, the time came for the Coinage of Telepathic Apparitional Manifestations (also known as the Coinage of Stalgmighty Stalctites) to be passed into law. The CrescentLakian senatii had read the increadible coinage of fantasy, knowing full well that to achieve this coinage of supremest deficit, Yade-Ben would have to be a miracle-working king of kings. Wherefore they renamed him Yezus.

Behold, as the hour of promulgation drew nigh, the king closed his eyes and raised his hand into the air. The CrescentLakian royal quill was handed to him, and a strong wind began to blow in the auditorium. “Brethren CrescentLakians, this arrogant coinage of hope is an ambiguous expression of your mood. It is historic and euphoric. It is a counterintuitive deficit to definitely fix it. Behold, I append my glorious seal of razzmatazz and bombastic opprobrium.”

A lightning bolt fell from the heavens and then there was calm. “It is done!” proclaimed the Chief Griot. “All hail the king!”

Lady Kem-Shun, Gambrach’s Councillor for the Coin, heard of the proceedings in Crescent Lakes and thought to examine the Kingdom’s vaults, to see how much remained. She drew her abacus and after a few beads, she was convinced something was amiss. “Whaaagwan inna dis place, mate? Hath Ser Magoo, head of the Everly Failing at Convictions Commission not brought forth all that he recovereth? Dis a wasteman ting!” But Magoo unlooked.

In Bedrock, Gambrach summoned his Spinning Quills, for he had an announcement of the utmost importance to make to them. “Scribes, I have decided that I will put myself forward in contention at electoralis federalis.”

“I KNEW IT!!!” whooped FemCallamitus, forgetting decorum. The other quills rolled their eyes.

“Sire,” said Gar Bar, with some caution, “but what about the 3 horsemen of the Kakocalypse – Shegolas, Gi Dah and Dan Jumanji have all turned against thee…”

“Aye. But there remaineth one horseman yet – Dool Shalom. He may yet be swayed. And if he be swayed, he may yet sway the other 3. And even if he not be swayed, I am Gambrach. I am King. I am 10 million underaged ballots in the gaddem bank, gaddemmit!”

“Art thou going into the land to tell the people? Into South Easteros to win over the forlorn of the Ipobusinian mischief makers?” asked FemCallamitus.

“Geez, no way man! That’s what I have you guys for. Quillers should get to quilling. I’m off to Jandinia, biyotches!”

“But Majesty,” said Bee Ree, the Chorgasm meeting isn’t for another 10 days…”

Gambrach smiled and said, “Estacode, baby! And if I decide to make an early detour to see the meisters, obu gini any bagger’s consain? Peace out.”

And as Gambrach left in his winged chariot, a delirious spirit descended upon FemCallamitus and he entered into Social Mediania and began to prophesy –

“Behold the ancient words, ever true, written by the Prophet Terrgee, for me and you, deep down in the lungu of the Zanga. Take heed, any that would run against Gambrach in electoralis, can they run faster than the wind? Can they flow faster than a river? Can they rise higher than a mountain? Nay! Hear the words of the Prophet Terrgee yet again, ‘thou canst only run, run, run, run, past Gambrach G, if thou runnest mad!”

And the people heard it. And there was no gaddem chill in the kingdom.

One thought on “Chronicles of Chill: The Prophecy of the Zanga”